The time spent since Part four of this case-study provided a series of the proverbial “brick walls” that would not allow me to access a variety of US records from here in Ireland.

However Pam has also been busy in the background working hard to see what information she can access about her family.  Here’s what she had to say:

There is no doubt that waiting for a reply, or for somebody else to look something up on our behalf, or for a vital event certificate is one of the most frustrating steps in genealogy.

It is a step that so often we are all guilty of attempting to bypass in favour of “getting on” and yet without the information our progress often slows down sometimes to a standstill.

Stepping back to Part two and the Ancestry ProGenealogists Report (available in full in part 2).  The report identified two potential DNA matches for Pam at the 4th cousin level both descended from James Michael Laughlin aka Michael Francis Laughlin of Ireland and St Louis.

St Louis  Our first step for this stage while we are waiting for information to come back from the Diocese Office will be to examine the information that Pam has copied to her tree from this earlier search and see if we can ascertain any additional clues as to Annie’s family and origin.  (Neither individual has a public tree.)

Let’s start by reminding ourselves of what information we have in Pam’s Tree: 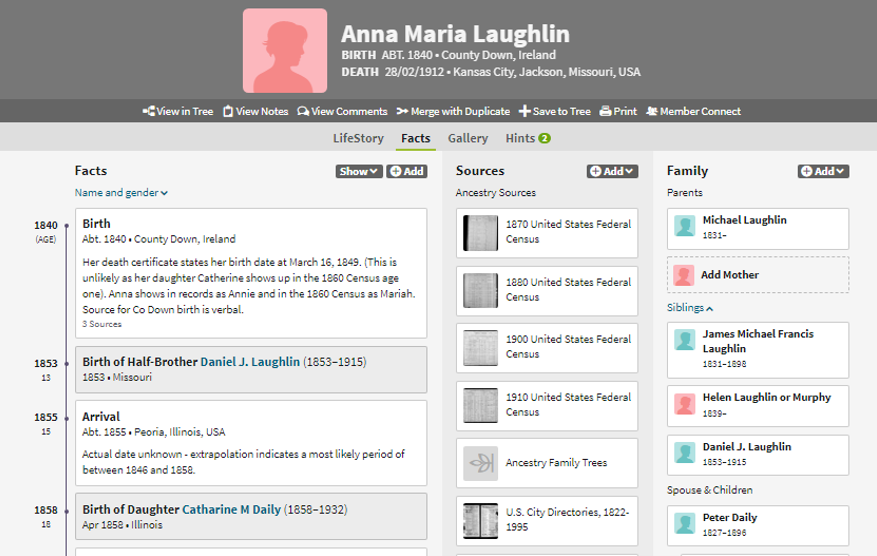 If you remember on closer examination of the Census data we adjusted Anna Maria Laughlin’s presumed date of birth from 1849 to around 1840.

This adjustment immediately creates a “red flag” against the dates recorded for Michael Laughlin (inferred father of Annie).  Michael’s approximate birth date is recorded as 1831.  While at 18 he could have been a young father, especially in Catholic Ireland it is highly unlikely that he would have fathered a child at 9 years old.

James Michael Francis Laughlin (1831 – 1898) still does remain within acceptable dates as a potential sibling for Annie.

Helen Laughlin or Murphy (1839 – unknown) is also within acceptable dates as a potential sibling for Annie.

Daniel J Laughlin (1853 – 1915) at about 13 years younger than Annie is within acceptable dates as a sibling for Annie but there is a gap of 22 years between James Michael Francis Laughlin and Daniel J Laughlin.  Not impossible, but certainly close to the general limits of a woman’s childbirth range.

Looking at the information for each individual in turn shows us that:

Michael Laughlin (suggested father of Annie) has no additional information other than the suggested potential birth of 1831 in County Down, Ireland.

Pam has copied across the following facts associated to James Michael Francis Laughlin. 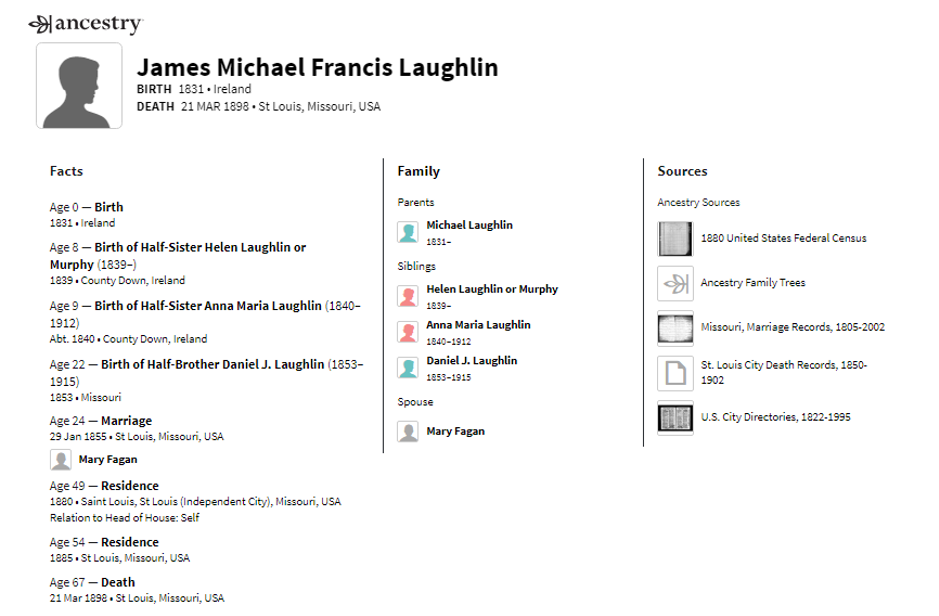 A marriage record (Missouri Marriage Records 1805-2002 on Ancestry) shows a marriage between Michael Laughlin and Mary Fagan on 29 January 1855 in St Louis, Missouri.

There is also an 1880 United States Federal Census for Mike Laughlin showing his house number as 2111(a shared house), family number as 90164 in Franklin Avenue, St Louis, Missouri.  Mike is age 49, employed as a Teamster, and was born in Ireland.

The family continues on the next page of the Census

This shows Mary Laughlin age 57, wife of Mike, who keeps house, and was also born in Ireland.  Also listed is Mike’s son James who is aged 4, born in Missouri.  This suggests that James was born circa 1876 some 21 years after the recorded marriage of Michael Laughlin and Mary Fagan.

This record is an index level only and shows no information beyond what is shown above.

There are no facts or records attached to Helen Laughlin or Murphy born 1839 in County Down, Ireland.

Daniel J Laughlin also has very little in the way of information attached to his profile. 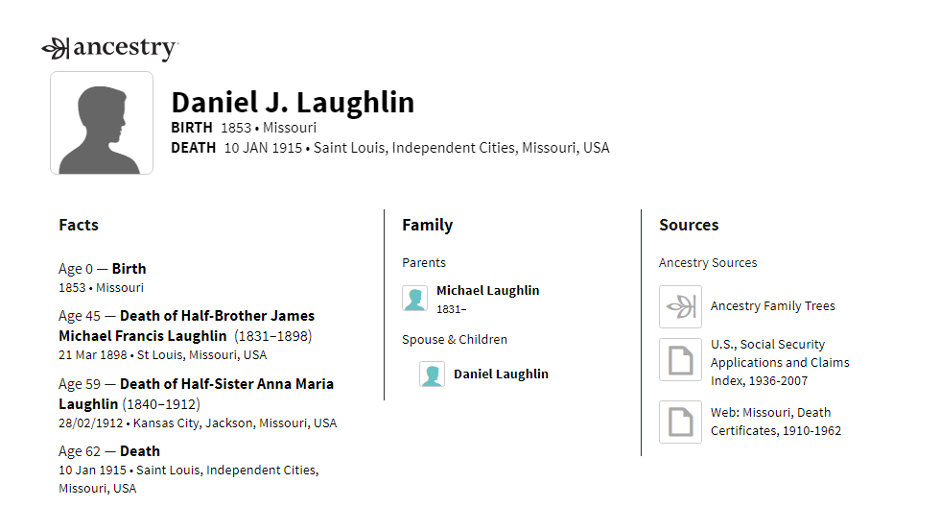 There is only a death record attached.  This shows that Daniel J Laughlin, by following the link to the Missouri Death Certificates available on Missouri Heritage https://s1.sos.mo.gov/Records/Archives/ArchivesMvc/DeathCertificates/SearchResults we can look up the matching death record for Daniel. 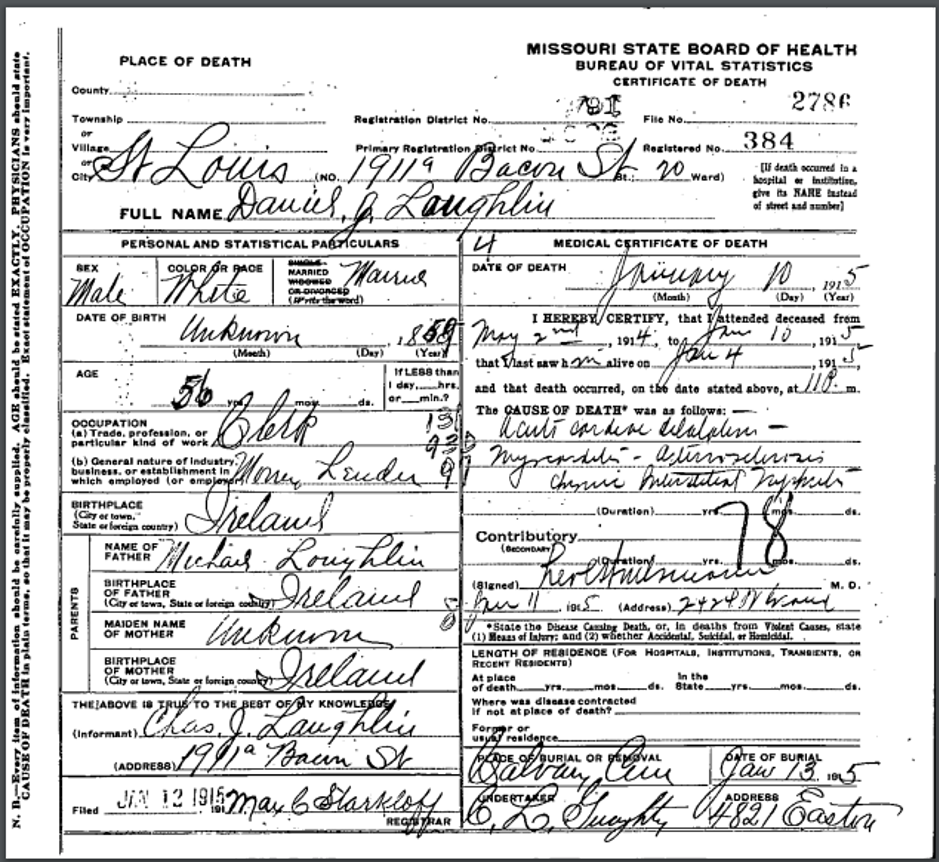 This record shows that Daniel J Jackson of 1911a Bacon Street St Louis City died on 10 January 1915.  The certificates records that he was 56 years old, recording his birth as an unknown date in 1859.  It records his birth in Ireland (and not Missouri as on his profile) and that his father’s name was Michael Loughlin who was also born in Ireland.  Daniel’s mother’s name is recorded as unknown and her birthplace recorded as Ireland.

The Ancestry ProGenealogists Report has some very valid information to add regarding the potential connections and records pertaining to the Laughlin individuals in Missouri.

These are extremely valid points raised regarding the potential of various Laughlin individuals living in the St Louis area of Missouri and one that Pam has not explored in any great extent.

There are a number of “little green leaves merrily shaking” for both James Michael Francis Laughlin and his suggested brother Daniel J Laughlin.  These include additional census records along with marriage, obituary and burial records.

We have a DNA connection that suggests that at least some of the answers may lie in the connections between the various Laughlin families of St Louis but we don’t have sufficient information to draw any useful conclusions.

While Pam is concentrating her research in Peoria and Jackson and connecting with the RC Dioceses to see if any additional information or clues can be located my challenge to the rest of the membership is to see just how far the power of the Green Room membership can achieve to identify, catalogue and investigate the St Louis side of records.

I need your help – realistically by myself I can’t make this happen in the amount of time available, I’m also struggling to access many of the sites in the United States, I simply cannot get access from here in the UK/Ireland.

It’s a fairly tall order, certainly too much for one individual to do in a short space of time but if group of us pulled together to design an excel spreadsheet,(or similar) input the information, identify additional records and enter the information and worked the information in an on-line collaboration as a team do you think we could pull this together in a few weeks?

We can set up a dedicated free to access area where we can access a spreadsheet, upload the census returns to along with other records so everybody can access the information and each person who is willing will be able to do an hour or two for the duration of the project.

In doing this exercise we would also begin to pull together a template, hopefully complete with instructions that any member could then in future download from the Green Room and follow to help them navigate through a similar exercise.  Now wouldn’t that be a useful resource to have?

If we have sufficient members involved in the processes we should be able to contain the work to a couple of hours each per week for two or three weeks.  Anybody that is maybe not experienced at extracting the information or entering information into a spreadsheet but would be happy to proof read would also be a bonus.

I would love to be able to have some more useful or even speculative information that would help me move this search to Ireland by July.

What do you think?

Are you prepared to get involved?

(You can see the full set of comments and suggestions offered when we first published the above part of the case-study here. Feel free to have a look. When you are ready, come back here to jump on to the next part of this case -study.)

Previous Lesson
Back to Course
Next Lesson