It’s worth giving a little bit of context before we go on. Most Irish place names (especially Townlands) have been in place for many hundreds – if not thousands – of years. Most were named when Irish was the language in everyday use – well before the introduction of English from the 13th century onwards. The following is a light-hearted introduction to Irish placenames and my intention is to give you a “feeling” for Irish place-naming conventions you will come across as you carry out Irish family history research.

Before the arrival of the Normans in the late 1100s, Ireland was a land of many “Little Kingdoms”. The tribal boundaries of these little kingdoms were constantly under pressure from ambitious neighbours. These boundaries and the agreements that held them in place, were often orally agreed and witnessed. Prominent landmarks like hilltops, rivers, forts and so on – were used to provide reference points. It was a time well before the first Ordnance survey maps were produced in the early 1800s.

Across Ireland, there was no single authority or administration – no single law system. The Brehons (judges) administered a type of local law – dealing with areas like the division of land across generations and the often-resulting disputes. While there were no maps, almost every visual feature in a kingdom, townland or field had a name. There were often up to 1,000 identifiable features inside a single townland.

As time went on, the Normans arrived. They established an administrative system and used versions of the existing names and naming systems for many of the towns, castles and baronies they put into place. Even later still, as English became widely adopted across the island – many of these place names were “phonetically” anglicised – sometimes – well, sometimes, atrociously!

Let’s take a tour of the more common placename types that you will find in Ireland – both in the records of your Irish ancestors and even today as you tour around Ireland admiring our road signage!

Now for some prime examples of common root words found in Irish placenames. 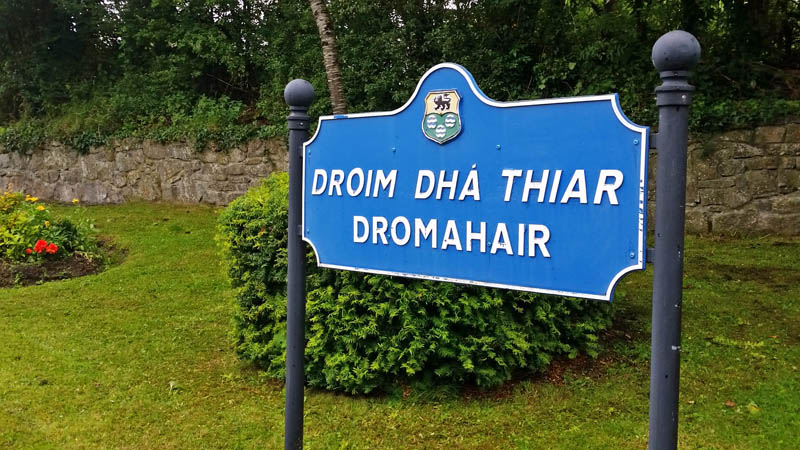 The cow was at the centre of the Irish farming economy for probably thousands of years. The Irish for Cow is “Bó” – pronounced “Boe” – and guess what we call roads in the Irish language? “Cow-ways” or “Bóthair” (small roads are often called “boreens”). This root word is found in many placenames such as Boherbue (Boher-bwee), Bohane, Bohermore.

Ireland has a fairly low tree line, and the tops of many of our hills and mountains are visible. The Irish for hill is “Cnoc” – pronounced “Canuck” – which you will often see in placenames as “Knock” – such as Knock, Knockroe, Knocknaheeny and so on.

Forts were often built on small hills with good visibility or in other prominent places. The Irish for fort is “Dún” – pronounced “Doon” – and this root word is found in the names of plenty of Irish towns and areas, such as Dungannon, Dungarvan, Downpatrick and so on. Smaller forts were called “Rath” or “Lios” in the Irish language. These words made their way into placenames such as “Rathmore”, “Rathmines”, “Rathgar”, “Lismore”, “Lisdoonvarna” and “Listowel”. 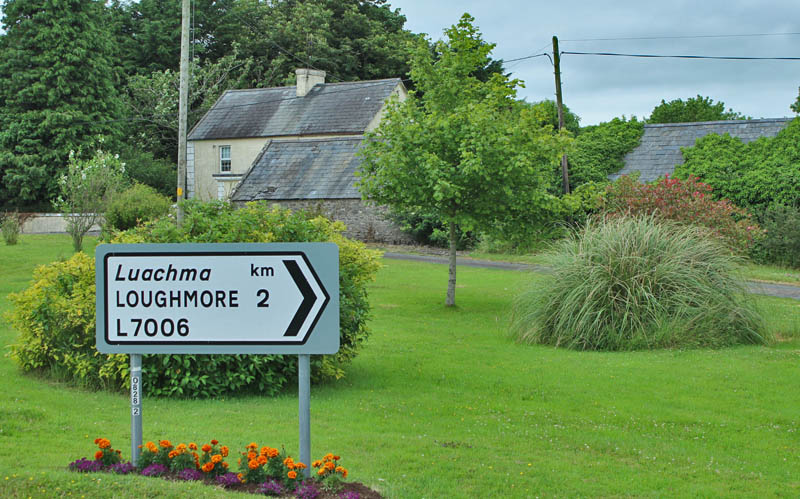 There were often rocky outcrops in the middle of pasture or bogs. As a feature, they were ideal for meetings or for fort-building. The Irish for this rocky outcrop is “Carraig” – pronounced “Carrig” – and you will find this in many place names such as “Carrick-on-Shannon”, “Carrickmacross”, “Carrigaline” and “Carrickfergus”. By the way – a rocky fort was called a Caishel – pronounced “Cashel” – maybe you know the town that goes by this name in County Tipperary?

Ireland had a monastic and saintly tradition from about the 400s. The Irish word “Cill” (pronounced “Kill”) meant church. Places like “Kildare”, “Killarney” and “Kilkenny” all got their names through association with a saint and their church.

I also need to mention “Wood” at this point. The Irish for Wood is “Coill” – which sounds very close to “Cill”, but is usually pronounced more towards “Kwill”. This word also appears as the root of many of our placenames – often starting with a “Kil” or “Cil”, making it hard to know if it were named after a church or wood. Examples include “Killduff”, “Kylebrack”, “Clonakilty”, “Kilgarvan” and so on.

I suppose some of the most stereotypical Irish placenames are those beginning with a “Bally”. “Baile” is the Irish for town or home (pronounced “Balya”) and appears as a root word in many of our townland (by the way, the Irish word for a townland is “Baile”), villages and town names. They include place names such as “Ballymena”, “Ballinlough” and many more.

Secondly, the Irish for mouth is “Béal” – pronounced “Bale” – and this word also features as a root in many of our “Bally” places that are located at the “mouth” of a river. They include places such as “Belfast”, “Ballydehob” and “Ballina”. 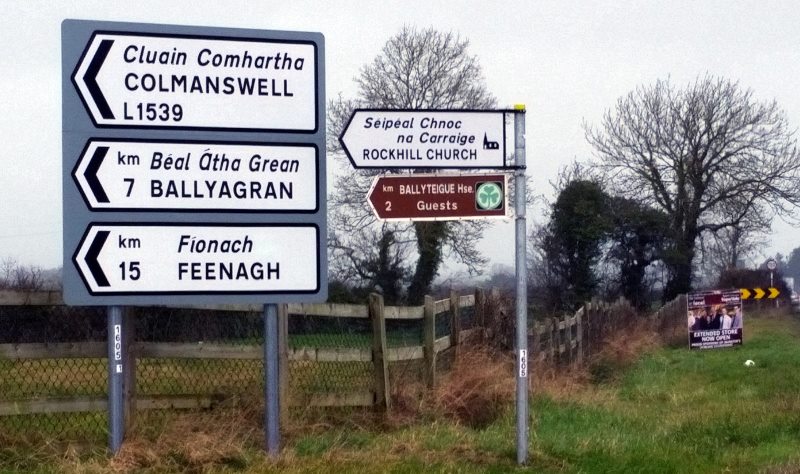 Where you have big hills, big fields, big rocks – you will also find small ones! The Irish for small is “Beag” (pronounced “be-yug”) while the Irish for big is “Mór” (pronounced “Moor”). These words are often anglicised as the root words “Beg” and “More” in many placenames. Places like “Killybegs”, “Beginish”, “Ardmore”, “Lismore” and so on.

There are so many more anglicised Irish words that you will find as root words in many Irish place-names – but the words above are the ones I see most often! Don’t even get me started on Irish words for colours – including Red (Roe), Black (Duff), Grey (Reagh), Yellow (Bue/Boy), Green (Glass), Brown (Dunn).  These are whole other class of Irish words that you will find hidden inside many placenames across the island of Ireland.

Let’s finish off with a little link back to Irish surnames. You see, you often find an Irish tribal name springing up within a place name. When the word “Ua” or “Uí” is included in the place names on signposts – this is a good indicator that you are driving near an old Irish tribal territory.

Just this week, I was travelling through the north Cork village of Castlelyons. “Castlelyons” is an anglicised version of the Irish “Caisleán Ó Liatháin” and is named after the Gaelic tribe who were prominent in this area up to the 1200s. This was one of the “little kingdoms” I mentioned earlier and the tribe was called the “Uí Liatháin” (from which we get the Lehane/Lyons surnames). They ruled over this area until the arrival of the Norman Barry family in the 1200s. At that point, the practical Norman Barry family used the already-established Gaelic name to name a place that survives to this day as a thriving village in County Cork.

You may already know the townland/village/city of origin for your Irish ancestors – but it is very useful to understand the typical anglicisations as you start to interpret the Irish placenames contained (and sometimes mis-transcribed) in the Irish record sets.

Click Here To Ask Our Genealogist a Question Related to This Module.

Previous Lesson
Back to Course
Next Lesson